The Nigerian Senate has again issued a fresh summons to the Inspector General of Police, Ibrahim Idris, to appear before it.

The fresh summon by Senate took place on Thursday, this time, the IG is expected to explain what the Police are doing over the spates of killings in different parts of the country.

Sponsored Video: MUST WATCH! Thanks for watching!
Recall that it was reported that the IGP had shunned the summon by Senate to appear before it for the third time. IGP Idris refusal to appear before senate got the lawmakers irked over the incident, which led to them describing him as an enemy to democracy.

However, the Senate fresh summon was made known in a statement signed by the Chairman, Senate Committee on Media and Public Affairs, Sabi Abdullahi, which was shared via their official Twitter handle.

Part of the statement reads, “The Senate said the crux of the matter that informed the invitation is the ceaseless spate of killings across the country and that matters concerning the arrest of Senator Melaye has in fact been overtaken by events.

“We noted the response issued by one Jimoh Moshood on behalf of the Inspector General of Police, Ibrahim Idris following yesterday’s resolution of the legislative chamber on the continued refusal of the IGP to honour the invitation for him to come and explain what the police are doing to halt the spate of killings across the country.

“Let it be known that the IGP by trying to reduce the reason for his invitation by the Senate to the arrest of Sen. Dino Melaye is simply holding on to straw. The issue of Sen. Melaye’s arrest has been overtaken by events.

“The courts are already handling the related cases. Our main concern is the security crisis across the country where people are being killed in scores on daily basis. The primary responsibility of the Police is maintenance of law and order as well as protection of lives and property.

“If there is a breach along the line of this responsibility, we do not see why the IGP should feel he cannot be invited to offer explanation to the arm of government which is constitutionally empowered to ask questions and investigate the breach.” 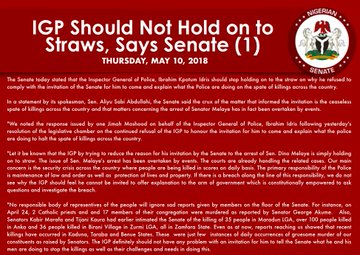 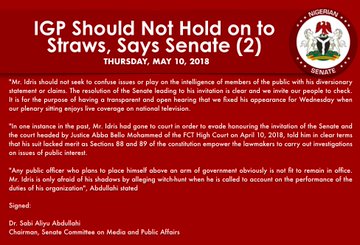 The post For The Fourth Time, Senate issues fresh summons to IGP Idris over spates of killings, says IGP should not hold on to straws appeared first on Happenings In Nigeria.